What have we learned from WannaCry?

WannaCry has been labelled “the biggest ransomware outbreak in history.” It crippled the NHS, hit international shipper FedEx and is believed to have infected 300,000 machines globally in 150 countries. Russia, Taiwan, Ukraine and India, being hardest hit according to Czech security firm Avast.

It’s estimated that removal of the virus takes a couple of hours, that’s 600,000 hours (albeit that large corporations can remove the virus from multiple machines at the same time) to remove a virus that could have been prevented in the first place. 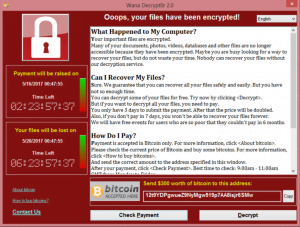 What was the attack and how does it work?

WannaCry was delivered via phishing emails, cleverly disguised and worded in order to trick the recipient into opening attachments which then released the malware onto their system.

Once installed, the malicious code is able to gain control of the host machine and it locks files and encrypts them in a way that they can no longer be accessed. A window is then displayed, demanding payment in bitcoin in order to regain access.

My machine has WannaCry, what are my options?

Unfortunately even if the payment is made, there is no guarantee that the malicious code will be removed.

There are various guides on the internet such as this one that discusses the steps required to remove the malicious code, unfortunately this involves the removal of the files that have been encrypted and so data is lost.

Why was WannaCry preventable?

What’s frustrating about the WannaCry outbeak is that it was all largely preventable, had more Windows users simply installed the security patch Microsoft released in March (Unless that is you’re still unfortunate enough to be using Windows XP…).

The moral of the story?

Vulnerabilities in software are discovered on a daily basis and updates are released in order to patch the insecure elements of code. The sad part is that these updates are often ignored by end users, either because they don’t have the time to restart their machine, or perhaps they’re worried that updating a particular application’s code will break their site, resulting in lost time whilst they re-code elements of their site.

WannaCry is a warning as to what can happen if software is not kept up to date, 600,000 hours (the estimated time taken to clean all the globally infected machines) is a lot of time wasted and money lost. If there is an available update for any software that you use, I’d recommend you think about the consequences of not installing it, rather than the effects of installing it.

How can Clook help?

Whilst we can’t help harden your local machine, if you have services with us all security and patch updates are carried out by ourselves as part of our management service.

We also take daily backups, in the event of an issue arising you can always recover the previous day’s data.

If you have a cloud or dedicated server with ourselves and you host multiple accounts on the same server I would recommend that you get in touch with us to discuss CloudLinux and KernelCare.

Get regular tips, tricks and updates!

Signup today for our awesome newsletter and recieve monthly emails with all sorts of helpful articles on hosting and web development.

This website uses cookies to improve your experience while you navigate through the website. Out of these cookies, the cookies that are categorized as necessary are stored on your browser as they are essential for the working of basic functionalities of the website. We also use third-party cookies that help us analyze and understand how you use this website. These cookies will be stored in your browser only with your consent. You also have the option to opt-out of these cookies. But opting out of some of these cookies may have an effect on your browsing experience.
Necessary Always Enabled
Necessary cookies are absolutely essential for the website to function properly. This category only includes cookies that ensures basic functionalities and security features of the website. These cookies do not store any personal information.
Non-necessary
Any cookies that may not be particularly necessary for the website to function and is used specifically to collect user personal data via analytics, ads, other embedded contents are termed as non-necessary cookies. It is mandatory to procure user consent prior to running these cookies on your website.
SAVE & ACCEPT